U.S. Department of Education Could Expand its Concept of Student Growth

The continuing debate about the use of student test scores as a part of teacher evaluation misses an essential point. A teacher’s influence on a student’s achievement does not end in spring when the student takes the state test (or is evaluated using any of the Student Learning Objectives methods). An inspiring teacher, or one that makes a student feel recognized, or one that digs a bit deeper into the subject matter, may be part of the reason that the student later graduates high school, gets into college, or pursues a STEM career. These are “student achievements,” but they are ones that show up years after a teacher had the student in her class. As a teacher is getting students to grapple with a new concept, the students may not demonstrate improvements on standardized tests that year. But the “value-added” by the teacher may show up in later years.

States and districts implementing educator evaluations as part of their NCLB waivers are very aware of the requirement that they must “use multiple valid measures in determining performance levels, including as a significant factor data on student growth …” Student growth is defined as change between points in time in achievement on assessments. Student growth defined in this way obscures a teacher’s contribution to a student’s later school career.

As a practical matter, it may seem obvious that for this year’s evaluation, we can’t use something that happens next year. But recent analyses of longitudinal data, reviewed in an excellent piece by Raudenbush show that it is possible to identify predictors of later student achievement associated with individual teacher practices and effectiveness. The widespread implementation of multiple-measure teacher evaluations is starting to accumulate just the longitudinal datasets needed to do these predictive analyses. On the basis of these analyses we may be able to validate many of the facets of teaching that we have found, in analyses of the MET data, to be unrelated to student growth as defined in the waiver requirements.

Insofar as we can identify, through classroom observations and surveys, practices and dispositions that are predictive of later student achievement such as college going, then we have validated those practices. Ultimately, we may be able to substitute classroom observations and surveys of students, peers, and parents for value-added modeling based on state tests and other ad hoc measures of student growth. We are not yet at that point, but the first step will be to recognize that a teacher’s influence on a student’s growth extends beyond the year she has the student in the class.

State Reports Show Almost All Teachers Are Effective or Highly So. Is This Good News? 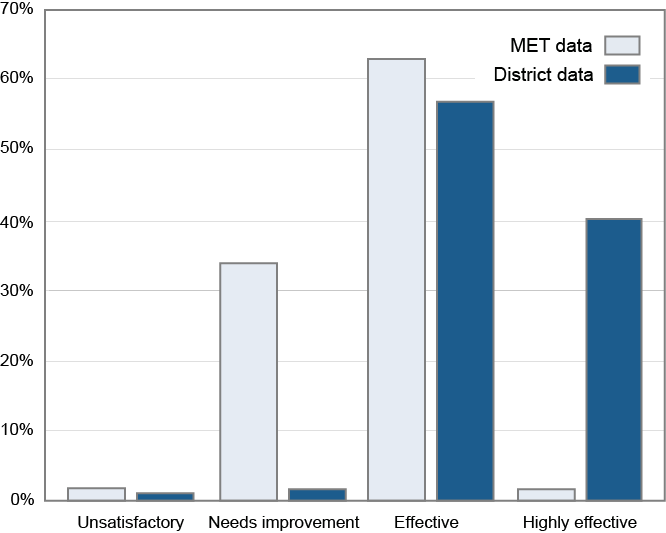 The New York Times recently picked up a story, originally reported in Education Week two months ago, that school systems using formal methods for classroom observation as part of their educator evaluations are giving all but a very small percent of teachers high ratings—a phenomenon commonly known as the “widget effect.” The Times quotes Russ Whitehurst as suggesting that “It would be an unusual profession that at least 5 percent are not deemed ineffective.”

Responding to the story in her blog, Diane Ravitch calls it “unintentionally hilarious,” portraying the so-called reformers as upset that their own expensive evaluation methods are finding that most teachers are good at what they do. In closing, she asks, “Where did all those ineffective teachers go?”

We’re a research company working actively on teacher evaluation, so we’re interested in these kinds of questions. Should state-of-the-art observation protocols have found more teachers in the “needs improvement” category or at least 5% labeled “ineffective”? We present here an informal analysis meant to get an approximate answer, but based on data that was collected in a very rigorous manner. As one of the partners in the Gates Foundation’s Measures of Effective Teaching (MET) project, Empirical Education has access to a large dataset available for this examination, including videotaped lessons for almost 2,000 teachers coded according to a number of popular observational frameworks. Since the MET raters were trained intensively using methods approved by the protocol developers and had no acquaintance or supervisory relationship with the teachers in the videos, there is reason to think that the results show the kind of distribution intended by the developers of the observation methods. We can then compare the results in this controlled environment to the results referred to in the EdWeek and Times articles, which were based on reporting by state agencies. We used a simple (but reasonable) way of calculating the distribution of teachers in the MET data according to the categories in one popular protocol and compared it to the results reported by one of the states for a district known to have trained principals and other observers in the same protocol. We show the results here. The light bars show the distribution of the ratings in the MET data. We can see that a small percentage are rated “highly effective” and an equally small percentage “unsatisfactory.” So although the number doesn’t come up to the percent suggested by Russ Whitehurst, this well-developed method finds only 2% of a large sample of teachers to be in the bottom category. About 63% are considered “effective”, while a third are given a “needs improvement” rating. The dark bars are the ratings given by the school district using the same protocol. This shows a distribution typical of what EdWeek and the Times reported, where 97% are rated as “highly effective” or “effective.” It is interesting that the school district and MET research both found a very small percentage of unsatisfactory teachers.

Where we find a big difference is in the fact that the research program deemed only a small number of teachers to be exceptional while the school system used that category much more liberally. The other major difference is in the “needs improvement” category. When the observational protocol is used as designed, a solid number of teachers are viewed as doing OK but potentially doing much better. Both in research and in practice, the observational protocol divides most teachers between two categories. In the research setting, the distinction is between teachers who are effective and those who need improvement. In practice, users of the same protocol distinguish between effective and highly effective teachers. Both identify a small percent as unsatisfactory.

Our analysis suggests two problems with the use of the protocol in practice: first, the process does not provide feedback to teachers who are developing their skills, and, second, it does not distinguish between very good teachers and truly exceptional ones. We can imagine all sorts of practical pressures that, for the evaluators (principals, coaches and other administrators) decrease the value of identifying teachers who are less than fully effective and can benefit from developing specific skills. For example, unless all the evaluators in a district simultaneously agree to implement more stringent evaluations, then teachers in the schools where such evaluations are implemented will be disadvantaged. It will help to also have consistent training and calibration for the evaluators as well as accountability, which can be done with a fairly straightforward examination of the distribution of ratings.

Postscript. Because we are researchers and not committed to the validity of the observational methods, we need to state that we don’t know the extent to which the teachers labeled ineffective are generally less capable of raising student achievement. But researchers are notorious for ending all our reports with “more research is needed!”