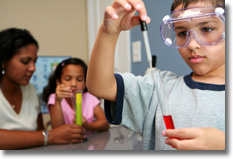 U.S. Department of Education has announced the highest-rated applicants for the 2014 Investing in Innovation (i3) competition. Of the 434 submissions received by ED, we are excited that both of the proposals for which we developed evaluation plans were among the 26 winners. Both of these proposals were THE highest rated in their respective categories!

In one, we’ll be partnering with WestEd to evaluate the Making Sense of Science and Literacy program. Written as a validation proposal, this 5-year project will aim to strengthen teachers’ content knowledge, transform classroom practices, and boost student achievement.

The other highest-rated application was a development proposal submitted by the Atlanta Neighborhood Charter Schools. In this 5-year project, we will assess its 3-year residency model on the effectiveness of early career teachers.

Both projects were bid under the “priority” for teacher effectiveness. We have a long standing partnership with WestEd on i3 evaluations and Regional Lab projects. This is our first project with Atlanta Neighborhood Charter Schools, and it builds on our educator effectiveness work and our ongoing partnerships with charter schools, including our evaluation of an i3 Development effort by Aspire Public Schools.

For more information on our evaluation services and our work on i3 projects, please visit our i3 page and/or contact Robin Means.

Today, the Institute of Education Sciences released the final report indicating a significant impact of the program for students in 12th grade as measured by the Test of Economic Literacy. In addition to the primary focus on student achievement outcomes, the study examined changes in teachers’ content knowledge in economics, their pedagogical practices, and satisfaction with the curriculum. The report, Effects of Problem Based Economics on High School Economics Instruction is found on the IES website.

Eighty Arizona and California school districts participated in the study, which encompassed 84 teachers and over 8,000 students. Empirical Education was responsible for major aspects of research operations, which involved collecting, tracking, scoring, and warehousing all data including rosters and student records from the districts, as well as the distribution of the PBE curricular materials, assessments, and student and teacher surveys. To handle the high volume and multiple administrations of surveys and assessments, we created a detail-oriented operation including schedules for following up with survey responses where we achieved response rates of over 95% for both teacher and student surveys. The experienced team of research managers, RAs and data warehouse engineers maintained a rigorous 3-day turnaround for gathering end-of-unit exams and sending score reports to each teacher. The complete, documented dataset was delivered to the researchers at WestEd as our contribution to this REL West achievement.

WestEd, which holds the contract for the Regional Education Laboratory contract in the western region (REL West) has contracted with Empirical Education for the operations of a large randomized experiment involving over 75 high school economics teachers throughout California and Arizona. With a September 2007 start, the project has called for very rapid start up by Empirical Education staff including delivery and processing approximately 40,000 student tests and surveys, acquiring data from over 50 school districts and conducting web-based surveys with 84 teachers. The Problem-Based Economics program, developed by Buck Institute for Education is being tested in the context of a single-semester course. During the 2007-2008 school year, two cohorts of students will take the Test of Economic Literacy (TEL) as well as performance assessments and attitudinal surveys to test the impact of the new program compared to the materials in use in the classrooms of control teachers.