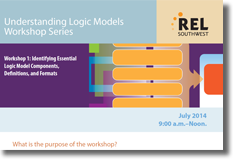 On July 17, Empirical Education facilitated the first of two workshops for practitioners in New Mexico on the development of program logic models, one of the first steps in developing a research agenda. The workshop, entitled “Identifying Essential Logic Model Components, Definitions, and Formats”, introduced the general concepts, purposes, and uses of program logic models to members of the Regional Education Lab (REL) Southwest’s New Mexico Achievement Gap Research Alliance. Throughout the workshop, participants collaborated with facilitators to build a logic model for a program or policy that participants are working on or that is of interest.

The US Department of Education (ED) has just released the eagerly anticipated RFP for the next round of the Regional Education Laboratories (RELs). This RFP contains some very interesting departures from how the RELs have been working, which may be of interest especially to state and local educators.

For those unfamiliar with federal government organizations, the RELs are part of the National Center for Education Evaluation and Regional Assistance (abbreviated NCEE), which is within the Institute of Education Sciences (IES), part of ED. The country is divided up into ten regions, each one served by a REL—so the RFP announced today is really a call for proposals in ten different competitions. The RELs have been in existence for decades but their mission has evolved over time. For example, the previous RFP (about 6 years ago) put a strong emphasis on rigorous research, particularly randomized control trials (RCTs) leading the contractors in each of the 10 regions to greatly expand their capacity, in part by bringing in subcontractors with the requisite technical skills. (Empirical conducted or assisted with RCTs in four of the 10 regions.) The new RFP changes the focus in two essential ways.

First, one of the major tasks is building capacity for research among practitioners. Educators at the state and local levels told ED that they needed more capacity to make use of the longitudinal data systems that the ED has invested in through grants to the states. It is one thing to build the data systems. It is another thing to use the data to generate evidence that can inform decisions about policies and programs. Last month at the conference of the Society for Research on Educational Effectiveness, Rebecca Maynard, Commissioner of NCEE talked about building a “culture of experimentation” among practitioners and building their capacity for simpler experiments that don’t take so long and are not as expensive as those NCEE has typically contracted for. Her point was that the resulting evidence is more likely to be used if the practitioners are “up close and immediate.”

The second idea found in the RFP for the RELs is that each regional lab should work through “alliances” of state and local agencies. These alliances would cross state boundaries (at least within the region) and would provide an important part of the REL’s research agenda. The idea goes beyond having an advisory panel for the REL that requests answers to questions. The alliances are also expected to build their own capacity to answer these questions using rigorous research methods but applying them cost-effectively and opportunistically. The capacity of the alliances should outlive the support provided by the RELs. If your organization is part of an existing alliance and would like to get better at using and conducting research, there are teams being formed to go after the REL contracts that would be happy to hear from you. (If you’re not sure who to call, let us know and we’ll put you in touch with an appropriate team.)